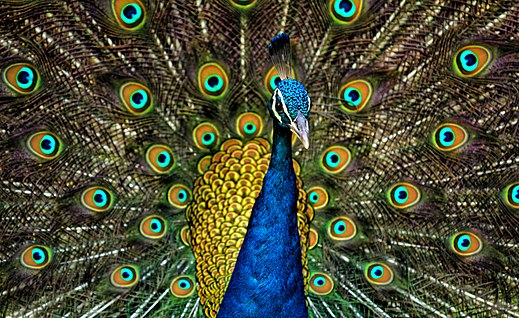 Technically peacocks do not lay eggs .The word peacock refers to the male bird while the female is called peahen which lays eggs called baby peacocks when hatched .The mother usually lay 4-6 eggs in a short period in spring.

Each of the long tall feather has an ornamental ocellus also known as an eye-spot which females don’t have and therefore are not able to spread their feathers because they have no long feathers at all.

WHY DO PEACOCKS OPEN THEIR FEATHERS.

Peacocks spread out their feathers as part of courtship ritual to attract a mate.When a male court a female ,he spread out his tail feather to display his colors as shown in the video below

CAN A PEACOCK HURT A CHICKEN:

Peacock might not be able to bite as dog can,they do still scratch ,peck and jump on people during mating season.

Peacocks are beautiful but still dump,they’ll open their tail feathers for a pigeon in a futile attempt to attract the other birds amorous attention