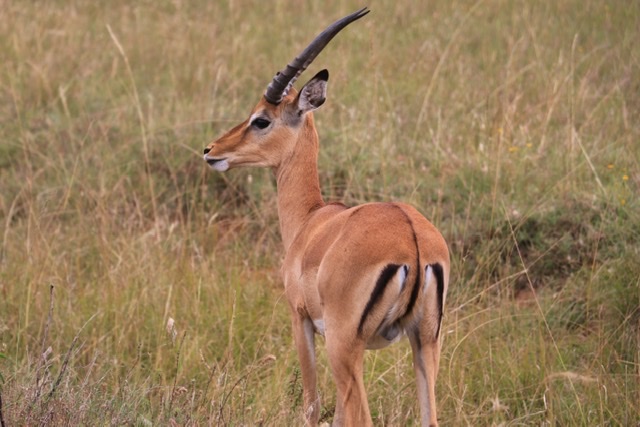 Best time to visit Nairobi National Park is any time of the year.you will always be lucky to witness impalas since females and young animals forms herds of upto 100 individuals while male live in a bachelor group of 60 animals and hence bachelors class.The name impala come from the Zulu language meaning gazelle.

The impala is a medium-sized antelope found in eastern and Southern Africa; I feel like they look like a mix between a goat and a deer.They have long legs and necks and black twisted horns.

Male impalas are known as rams while females are referred to as ewes and have no horns.

Most young impalas are born around mid-day>safest time to give birth since most of their enemies are resting; half of newborns are killed by predators within the first few weaks of life.

Male impalas produce a scent from a gland on their foreheads to advertise their status to rivals and when he loses his rank a Male produce less scent .

Males will fight for status and territory throughout the mating season using their antlers as weapons.

Mothers can delay giving birth for a month if the weather conditions are harsh.

Impalas leap and scatter in all directions when attacked to confuse the predators.

Don’t forget to pay a visit at National national park to learn more.I travelled with spoton vacation and booked mr mwendwa as my tour guide. He explained everything i needed to know.